We are back home, after 2 weeks in the sunny Thailand. 2 weeks with good and bad experiences, with lots of impressions and observations about the country, its people, culture, and customs. With a lots of things that we enjoyed but also with lots of things we hated. With over 150gb of images and a hard task ahead of us to select and post-process them. And a real love and hate affair.The itinerary started in Copenhagen with a Thai Airways flight in the middle of the day, that arrived in Bangkok ahead of schedule at 5:30 in the next morning. We spent 4 days in the capital city, but we had a day trip to Ayutthaya, the former capital of the kingdom using the services of a local agency: BKK tours (very happy about it).

After the period spent in the capital, we moved to Krabi region and we selected three different locations, providing quite a lot of variety: Railay beach, the most famous beach in Krabi, Phi Phi island, an island renowned for its night life and huge amount of backpackers and Ao Nang, a more traditional touristic place in Krabi, probably the first one in the area that opened to the high volume tourism. The return was quite long, starting in Krabi airport with a short flight to Bangkok, continued with a long layover there, 4 hours that turned into 5.5 due to some issues with the airplane and arriving home in Copenhagen next morning after almost 12 hours flight.

So, here are out conclusions, as honest as possible reflecting the positive and negative points of the trip. We discussed those points on or way back to Copenhagen, when everything was still fresh so the post was mentally sketched since then, but it took a while to write it and select some images for it. So 6 ideas with pluses and minuses are listed bellow: 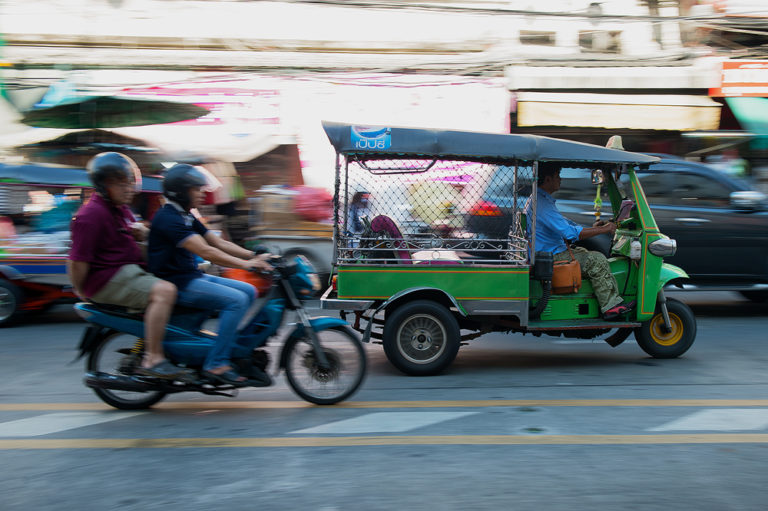 1. Its almost always sunny. But also hot and humid. Coming from a country like Denmark, you will definitely appreciate the nice hot weather, the sun that shines every day. You can spend day after day at the beach if you have one close by. People are usually more happy when constantly seeing the sun and more depressed when deprived of light for a long period of time. However, the weather in Thailand is too “nice”. When we got off the plane we were hit by a jet of hot air, although it was only 5:30 in the morning. And when we moved to Krabi area, the humidity also kicked in, adding some level of discomfort on top of the heat. I was humid and sticky all day long; taking a shower brought a bit of comfort for a while, but soon, the sweat will regain its place on my body.

2. The people are nice and friendly. Most of the Thai people are polite, helpful, always giving an unconditional smile. There are few that try to milk all the money out of the tourists using various scams, but they are not the majority of the Thai people, so I don’t consider them representative. I noticed that normal guys on the street are always helping old people or women carrying heavy luggage, they seem to have a very good civic attitude. But the level of English is so low, that sometimes, unfortunately you cannot really use this help that is offered to you. Even in some hotels, you could hardly communicate with receptionist or other stuff. There was a lot of gymnastic language and we used gestures to make ourselves understood. But because of this, we always had a feeling of uncertainty whenever we had to rely on the information provided by the locals.

3. The nature is great and so diverse. The resorts are surrounded by vegetation, you have plenty of species of trees and flowers, especially orchids. If you are an outdoor guy you will feel in heaven surrounded by so much nature. There are plenty of natural park where the vegetation is even more diverse. In lots of places you can arrange elephant trekking (we avoided this as we don’t want to encourage the animal exploitation). However this variety of nature comes with a price: the insects, our biggest enemy while in Thailand. They come in every size and flavors: mosquitoes, flies, ants, spiders, chiggers, cockroaches and many other that I don’t know and I call generically bugs. We were bitten like hell by all of those.I returned home with around 100 bites in the groin area, itching like hell, thanks to some insects called chiggers, that I discovered later with the help of google. An insect that I was not even aware it exists until now.

4. The landscapes are great. The beaches are amazing, surrounded by rocks or with sea stacks coming out of the water. The sand is soft and the water is usually clean. But like everything that is beautiful, it needs to be shared with others. There are tons of tourists everywhere. And the speed boats and long tail boats are really spoiling the beauty of the place and are polluting the clear water, decreasing the quality of the beaches  gradually destroying some nature heavens. I know, that the  usual scenario: everything that’s beautiful don’t last forever, so we are happy to see these places while they are still there.

5. The foods are so diverse and intriguing. There are plenty of ingredients used in cooking, all kind of meats, seafood, vegetables, fruits and spices. A lot of things look so yummy and tempting and I would have liked to try more. Food is a cultural thing in Thailand and a lot of energy is spent with cooking and eating. However the level of hygiene is pretty low. The street food is cooked in horrible condition while the kitchens in some of the restaurants are dirty and improvised. If you want to enjoy the food in Thailand, you should better not think about how it was cooked.Having sensitive stomachs and moving from one place to another, we tried to play safe and avoid “risky” experiments.

6. The Thai culture is very rich and interesting, based on a lot of history of freedom, Thailand being the only country in the area that was not a colony. You should admire those places for their bravery and ability to stay under control all this period. The live of the people is centered around two major sources spiritual inspiration but also control: the monarchy and the religion. The king is 88 years old and is ruling the kingdom for 69 years. He is extremely rich, having a fortune of 30 billions dollars.

And while the governments changes very often , sometimes after a coupe d’etat, the king is a central figure of the country. We arrived in Bangkok one day after his 88th birthday  and we were surprised to see the huge installation carrying his images in every street corner, intersection or building. On top of this, millions of flags and decorations were placed everywhere. Religion is also an integral part of thai culture. The  temples are very frequent in Thailand, placed very close to each other. Huge statues of Buddha sometimes made of gold or at least plated with gold,  monks living from people donations, trees made of donated money.
While didn’t really bothered us that much, we couldn’t stop noticing that while there are people living on the streets, under the subsistence level, huge amounts of money are spent for both monarchy and religion.While in Denmark most people are complaining about the Queen spending to much from our taxes, in Thailand, people are happy to have so much money spent on the king celebrations. And again, some unfortunate ones are sleeping on the street or on the benches under a bridge, surviving from the pity of the more lucky ones.

7. Thailand is supposed to be cheap. Really cheap. And indeed, if you live like a local, you don’t have to spend much. You can have a meal with around 50 baht (1.25 EUR), a long ride with the boat along Chao Pharaya river is 20-25 baht (0.5 eur). However, Thailand can be very expensive too. Most of the tall hotels in Bangkok are having roof top bars. So we visited the one in our hotel, aiming to have a beer. Surprise, surprise: one 0.33l Hoegaarden was 430 baht (about 11 eur). More expensive than in Denmark. Even the local beer was about 300 baht, about 7 times more expensive than in a 7Eleven store. Also, please be aware that in most of places in Bangkok, the prices are displayed without service fee (10%)  and VAT (7%).