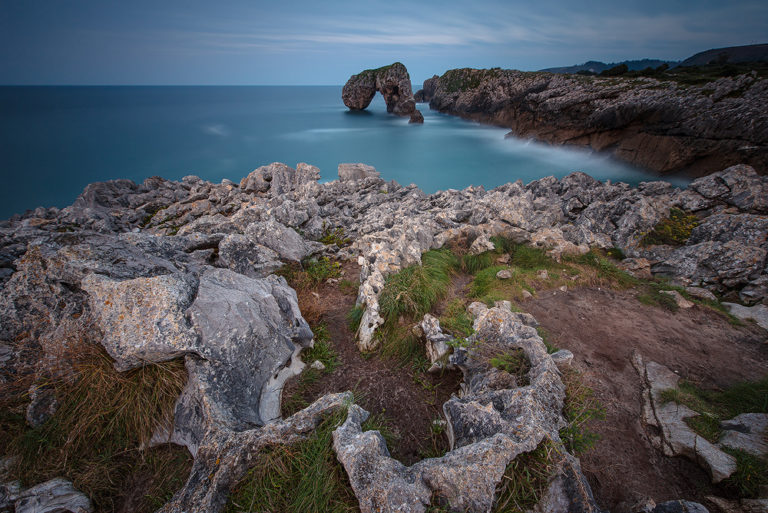 The second part of our north of Spain trip moved a bit to the west in the amazing Asturias. A hidden gem along the coast, with very photogenic beaches, some great mountains ( we didn’t explore those as we focused mostly on the coastline) and great food. After a long train ride from Santander, we ended up in Naves, a small village close to Llanes. It felt and smelt like countryside: horses , cows, fermented grass covered in plastic( to feed the animals during winter), algae collected from the sea to be used probably as natural fertilizers. The hotel was unexpectedly good (Hotel Villa Maron a 19th century house, tastefully renovated and with everything that you need for a comfortable stay). 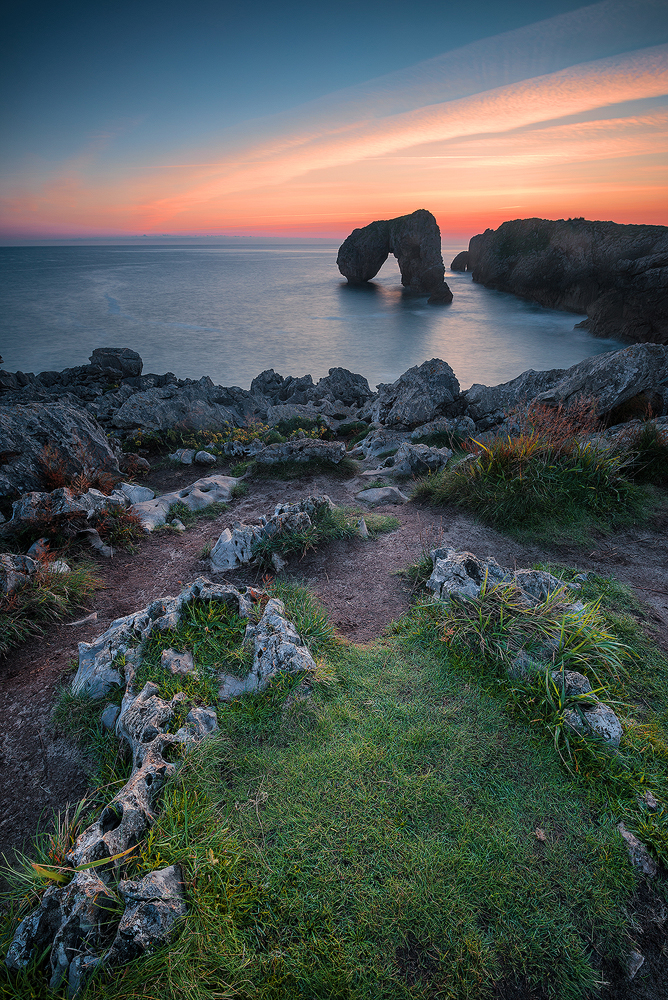 The photographic highlight of the area is Castro de las Gaviotas, a beautiful arch in the water, just off the coast, that offers quite few composition choices. One of them, from Playa de la Huelga, gives very nice elements to play with, like the small Rio de San Cecillio, that crosses the beach, leaving some curvey flow of water. However the beach is pretty tidal, advancing way into the sea, towards the arch, at low tide. Unfortunately we got the low tide in the middle of the day, so we struggled with the harsh midday light and shadows. All the beautiful shapes that we used as foreground are way gone when the tide grows high. The area also have a very interesting geographical phenomenon, an inland beach (Playa de Gulpiyuri), 100 meters inside the coast, that gets filled with water only at high tide through a system of channels and caves. Not the most photogenic, but well worth visiting for the phenomenon itself. 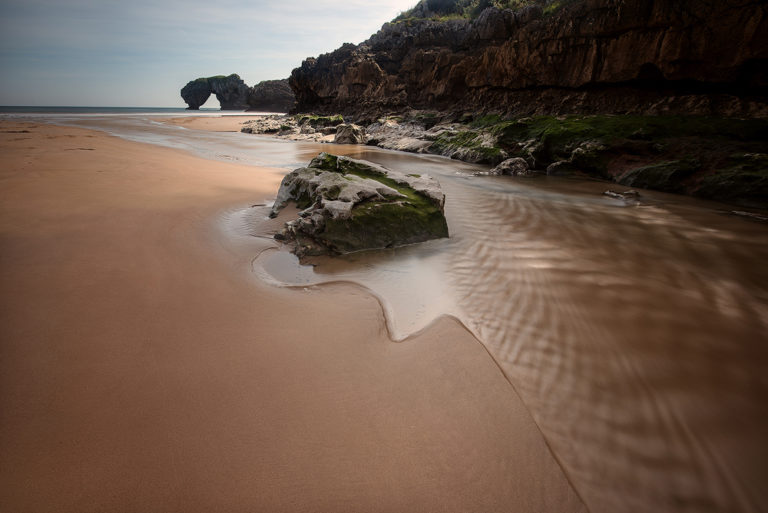 After Naves we had a lengthy trip to Novellana, two segments of 2 hours each, by the mighty Feve (local train company). Especially the segment between Oviedo and Novellana was incredibly slow, with paces not exceeding 40 km/h, but going much lower than that at times. Our stay here started with a beautiful sunset at Playa del Silencio, followed by a huge plate of calamari back at the hotel. Next day, it was the train hell: on the way to Santa Marina, a small village few kilometers away, we got stuck in the station, as the train didn’t bothered to show up. Confusion, panic, anger for 20 minutes, until a gentle old guy who was cutting the grass between the tracks, made us a favour and called Feve; they sent a taxi for us. We wasted like half an hour for a 4 minutes trip, but we got there for free. So we saved about 3 euros:-). On the way back: same story, this time the station is in the middle of a forest, with not a soul, besides us. So I had to bite the bullet and call the Feve customer support: Habla ingles? No. Shit. I have to do it in my poor broken Spanish. With the phone on speaker, we tried very hard to explain that “el tren no paso” and we are stuck (again) in the station. Incredibly,  the story repeated: they sent a taxi (actually a regular car that stopped in front of us and we tried to speak with the lady driver with no luck) and we return to hotel for free again. 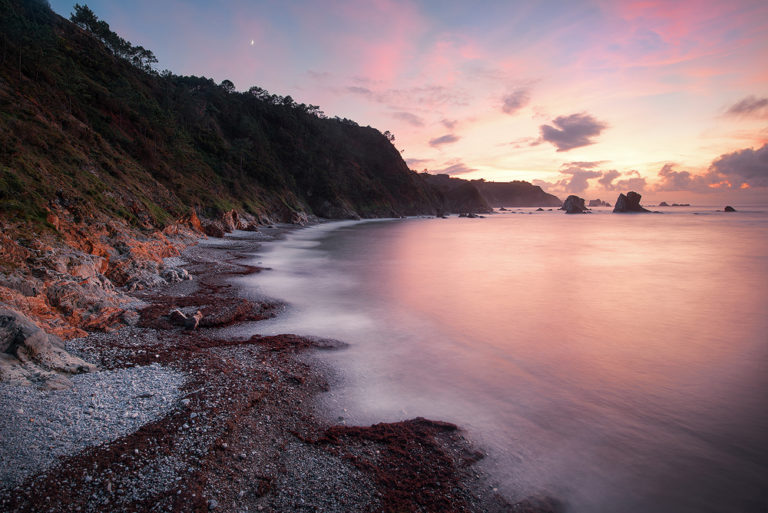 They must be very reach to transport their customers by taxi. Or they probably have very few customers.  In the afternoon, we were planning to do the same trip, for the sunset shooting. The morning guy that called Feve for us is there, laughing his ass off that two masochistic people try again to reach a playa he considers rather boring (obviously he saw it millions of time in his life; and he is not a photographer). And this time the train is coming, just 15 minutes delayed and we can do our shooting session. Playa de Gueirua, the photographic subject of the day, is an amazing location, with long rock formation flowing into the water, with amazing patterns and textures for a perfect foreground. And far away, 4 aligned sea stacks , complement nicely the frame. Too bad its a clear day and sunset is facing the other side, so not too much color to play with. The trip back we were extremely lucky that I have a  work friend, living in Asturias, that came and gave us a lift, ending the evening with a great dinner in Cudillero. Much appreciated Aurora and Victor, see you next time in Copenhagen! 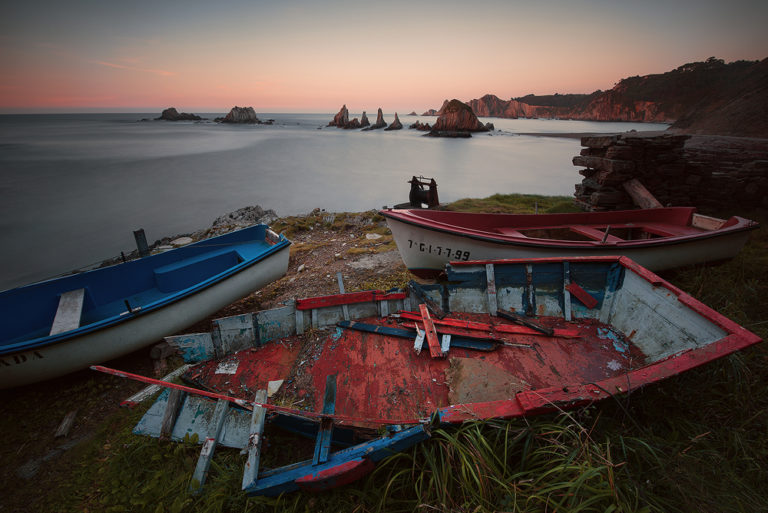 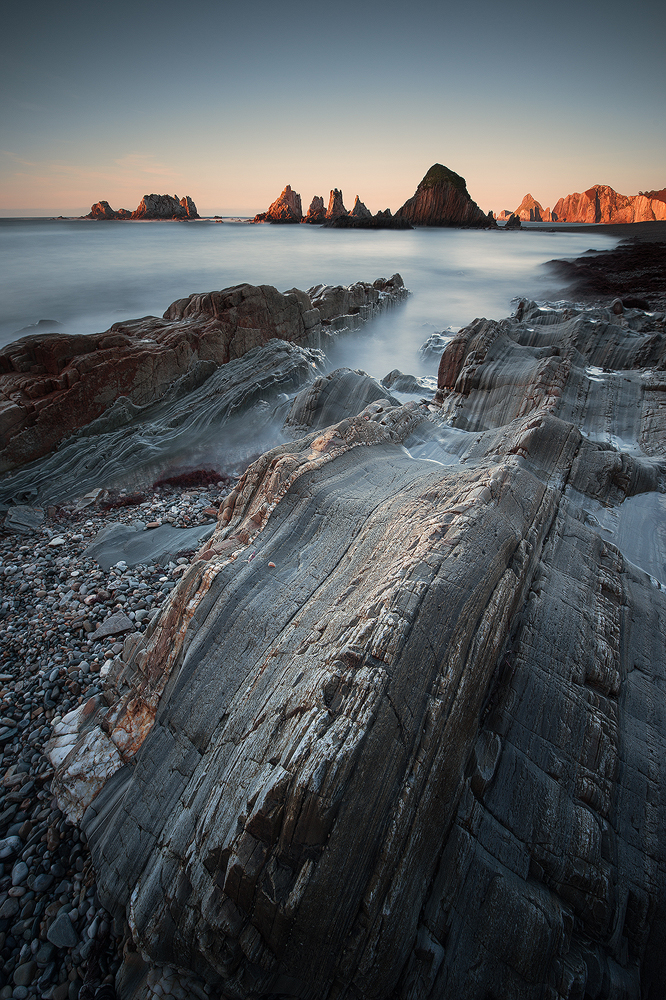 After the previous day experiences, we moved to our next location by taxi /this time not for free). We arranged with the taxi guy from previous day to fetch us in the morning and we arrive pretty early at Hotel Villademoros, probably the best accommodation we had in this trip. Old 18th century house with lots of character but with an impeccable interior. The owner is a very nice guy that speaks English and he helped us with the luggage, offered us pomegranate when we met him and his kids on the beach and drove us to the bus station when we left.  It is the kind of hotel that you don’t really mind having a rainy day, as the cozy living room, with books, photo albums and board games doesn’t let you getting bored. We got two so and so sunsets shooting sessions at Playa del Campiecho. The tide was not cooperating for shooting the famous local cave; It is a cave carved in the high shore, opened on two sides and framing a photogenic sea stack ( to be honest we could have taken our chances and stay there later, but with the growing tide, none of us wanted to have our way back on slippery stones covered by water, in a dim light). 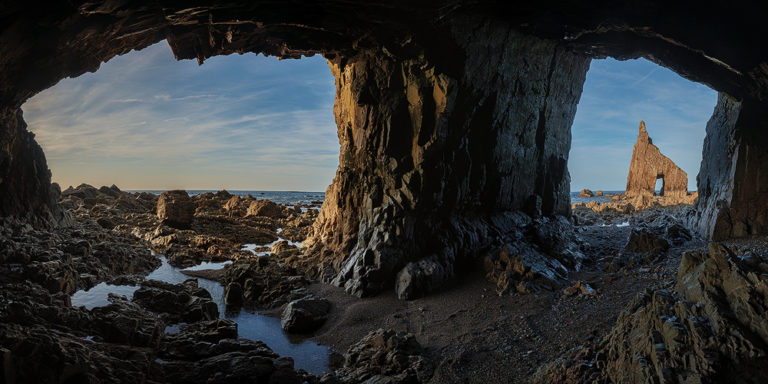 Anyway, it was a great place to photograph, with few compositions on both directions, allowing us to shoot a sunrise as well in the next morning. My rubber boots didn’t helped that much when shooting in the sea. I got them full of water in no time, and coupling them with a pair of goretex pants was not such a good idea either, as the water came in, but got no way out, ending up in my underwear during the boots removal process. But lesson learned 🙂 And just before leaving, we had an amazing sunrise in a peaceful location, at Ermita de la Regalina, a delicate little blue and white chapel, beautifully located on a grassy headland. Next to it, a horreo, the traditional Asturian grain store, to complete a very nice setting. 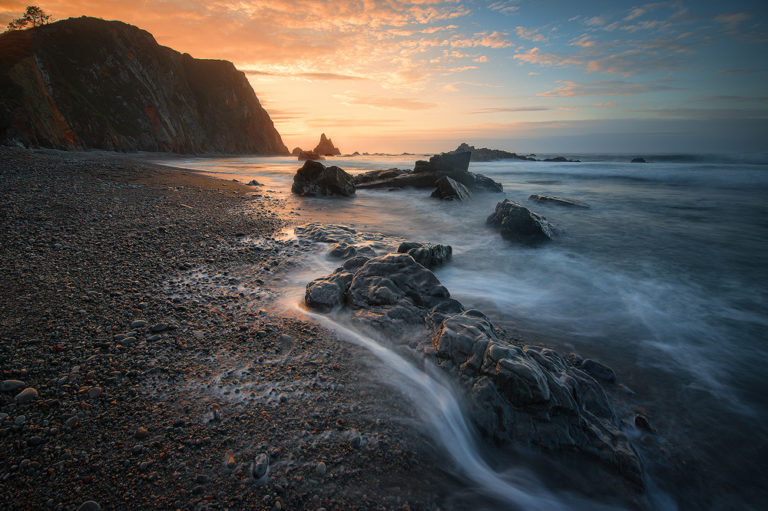 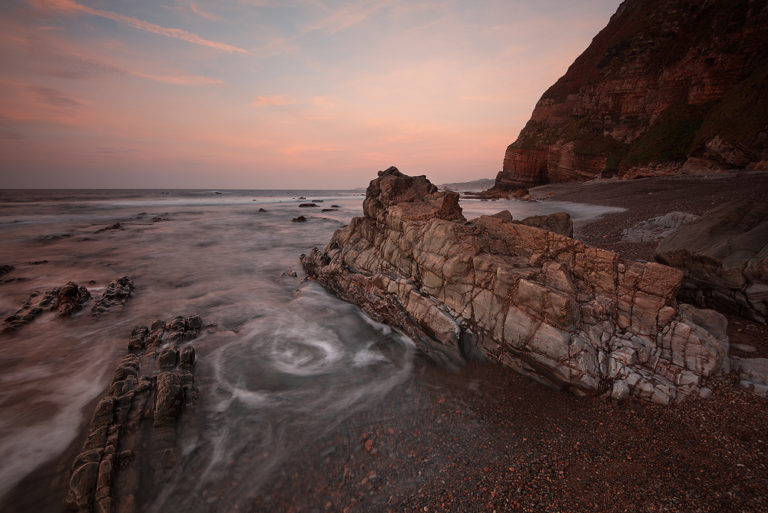 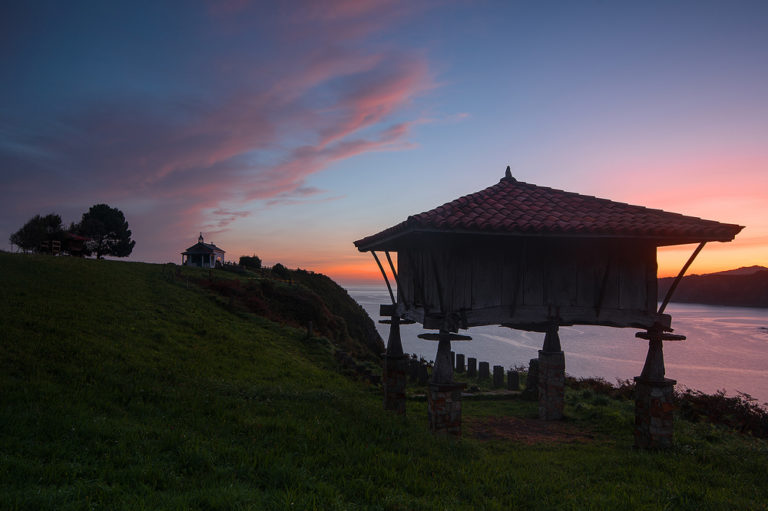 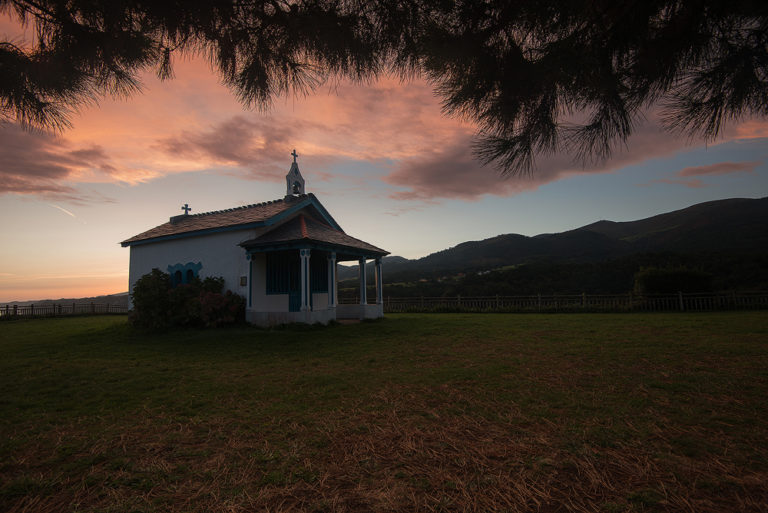 Our last shooting location was in Luarca, but we didn’t managed to accomplished much due to horrible weather. As soon as we arrived, the rain started, so we need to return to the stunning Playa de Portizuello some other time. The beach is quite small, but very interesting one, with two different halves, separated by a tall natural wall. Each side has its own sea stack. The half located more towards to the west, gives  the feeling of a a cathedral, being surrounded by tall walls. Amazing rock formations can be coupled with the sea stacks for very interesting shots, but definitely not during heavy rain. Luarca itself is also a charming fishermen village, a bit larger than the picturesque Cudillero (another location for a future trip), with many hotels and restaurants ( being very hungry and pressed by the time, we managed the performance to lunch at the worst of the list according to tripadvisor; and damn, it was bad ). But we compensated with a very nice dinner, obviously in a different place 🙂 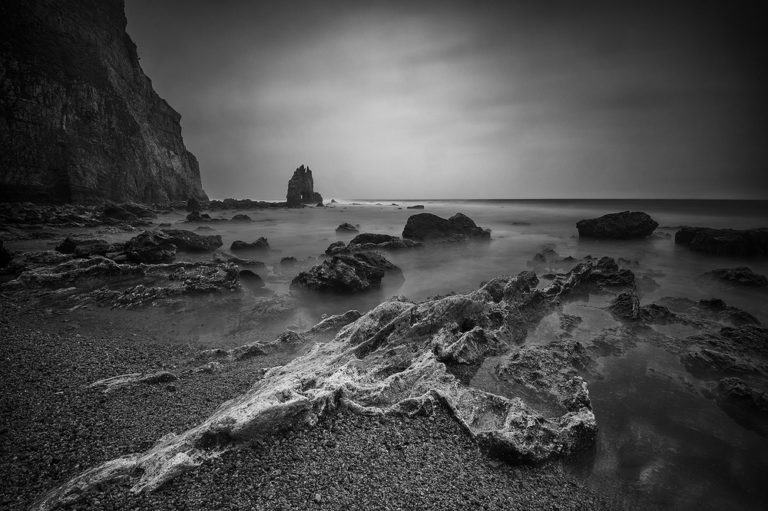 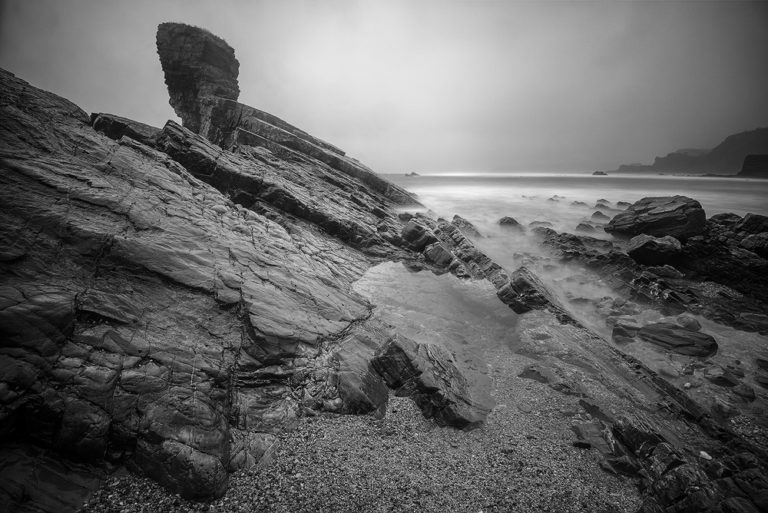 Just before flying back to Copenhagen, we spent the night in Oviedo. We decided that we deserve a relaxation evening, without serious photography, so we walked a bit in the old town and we settled for a nice sidreria, in the heart of cider area of Asturian capital : Calle Gascona. We enjoyed two bottles of cider ( don’t worry, this number is very misleading due to the traditional Asturian way to pour cider from large distance, so that the drink gets a bit bubbly ; the drawback is that half of it or even more, depending on the skill of the waiter, ends up on the floor; and it can be very sticky if inside). 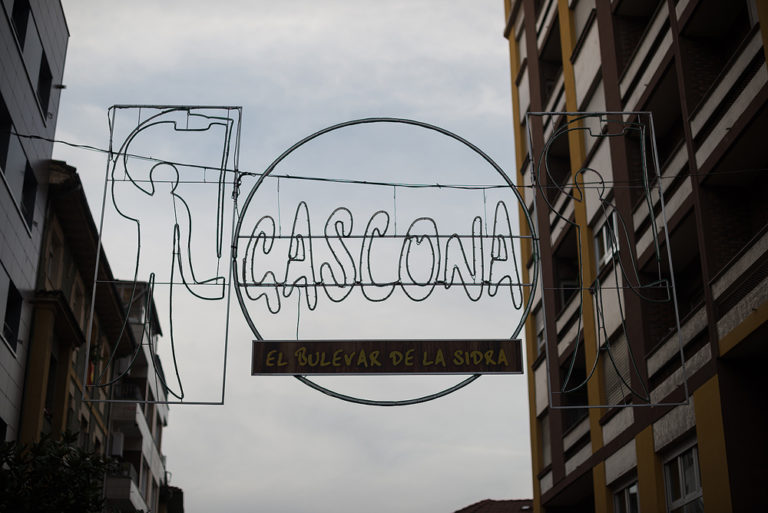 Next day, we ended up an amazing trip along the Spanish coastline, with a definite desire to come back again (maybe next year, who knows). And some lesson learned : learn more Spanish, invest in a pair of waders and plan better for the very slow and unreliable trains. 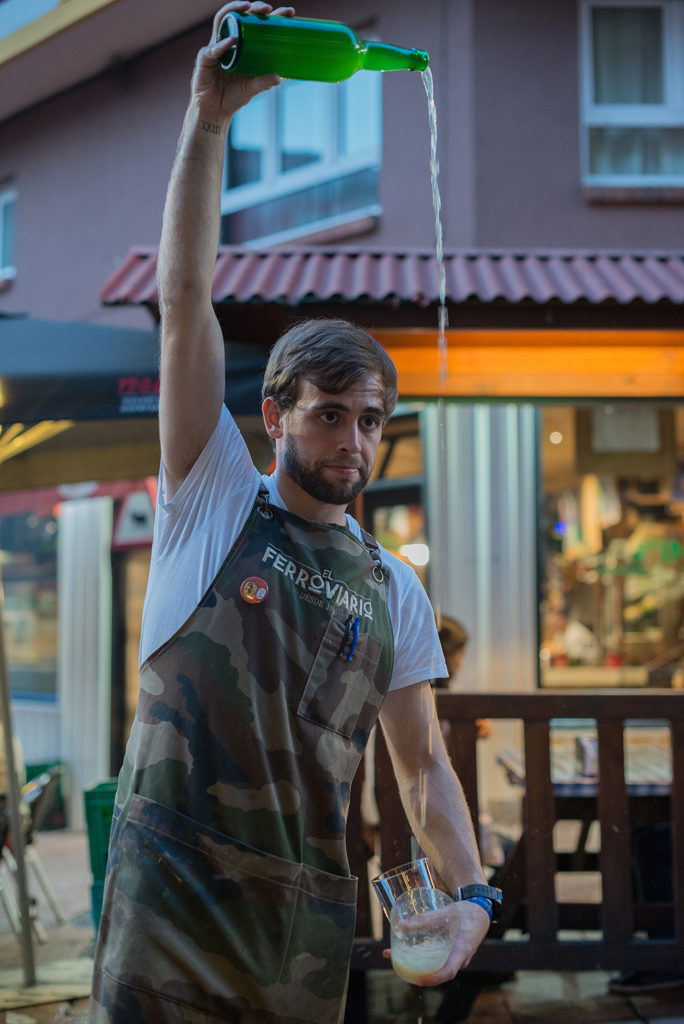 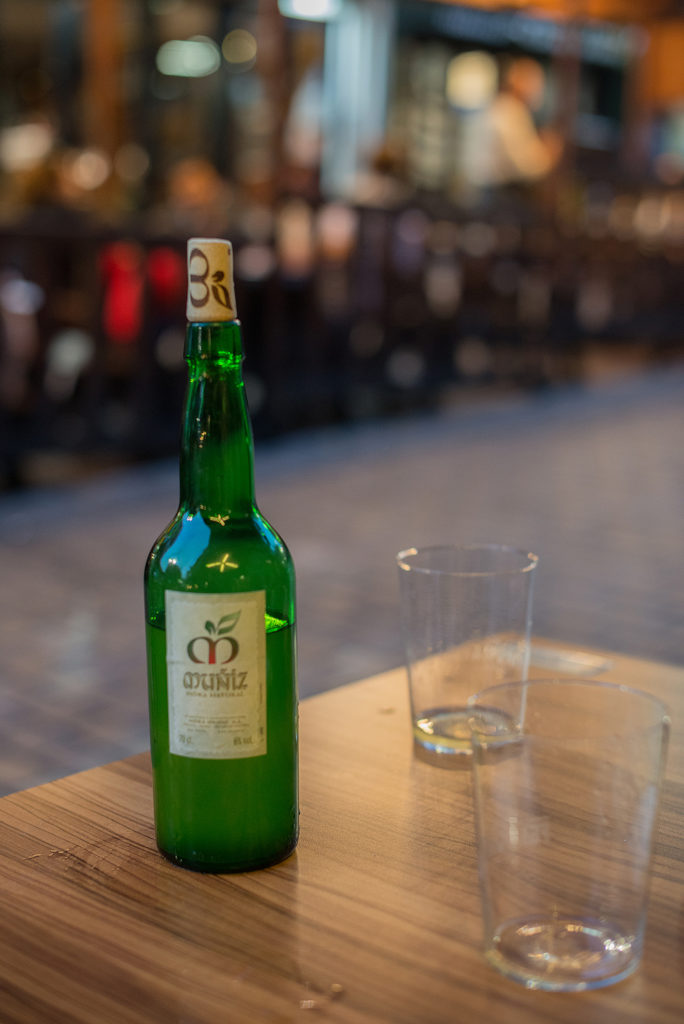