November 11, 2017
After reviewing some weeks ago the great View Point 2 from DXO labs, this week I found out about a new excellent tool for straightening and perspective correct your images: the new feature that Adobe released into their Photoshop CC. We all know about the controversies around the new business model of Adobe for Photoshop software and even if some people complained about the need to pay monthly fee instead of buying a software for life, I still think that this CC is a great deal, especially because of getting new features much often than before, in the old major release way.

So, what is this new feature about? It is a tool called “Perspective Warp” and as it name suggests it is intended to be used for correcting perspective. The first impression about it is that it is an extremely powerful tool; this mean in Adobe world that you can do great things with it but you can also royally screw up your images if used incorrectly.

I would suggest to start (as I did as well) by watching this great explanatory “how to” video by Julieanne Kost, Adobe Principal Evangelist Photoshop:

How this works? The tool can be found in Edit menu, right after “Puppet warp”. You should better start by duplicating your layer as this tool works on the background layer as well. The tool has two sections: Layout and Warp. In the Layout you can select one or more working quads that contains the perspective plane that you want to change while the Warp tab is used for actually straightening. The Warp tab has 3 default options: Automatically straightening near vertical lines, Automatically straightening near horizontal lines and Auto warp to horizontal and vertical.
A Reset button is present as well in case you are not happy with the result and you want to start the Warp process all over again.
Shift + arrow keys is great for high accuracy movements of the control points in both Layout and Warp modes.

I will not insist in describing how it functions as it is better to try out yourself after watching the above tutorial, but here is a quick and dirty test of this tool. Of course, the results are not perfect but I can foresee a huge potential of “Perspective Warp”. 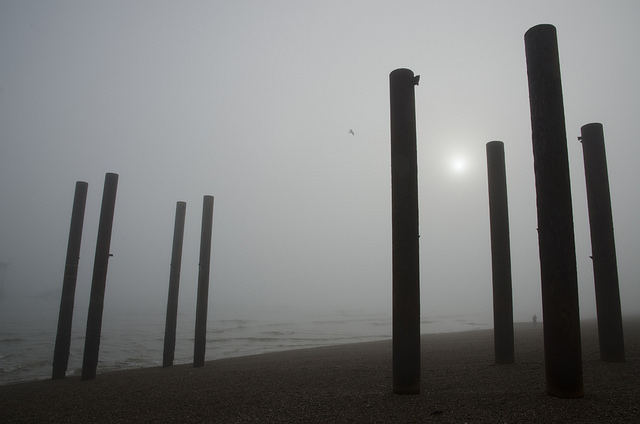 I start with this image from Brighton UK in a deep foggy day of April. The poles are part of the “West Pier” that burnt in 2003. You can obviously noticed the perspective issues and the distortion of this starting image. Although there are other ways to  correct it, I decided to give it a try with the new “Perspective warp” to see what it can do: 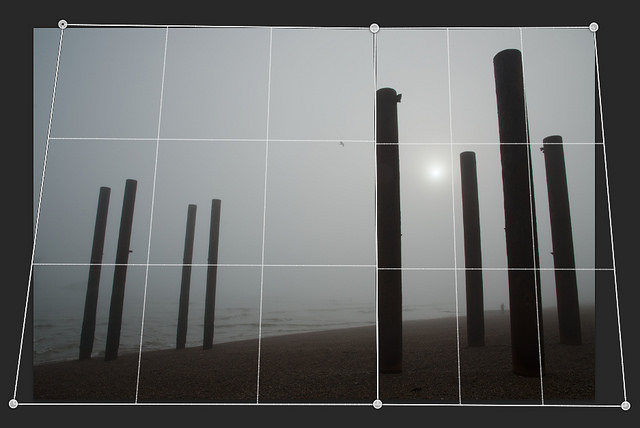 I start in the Layout mode by selecting the 2 quads that I would like to work with. They are placed on the left and right on the mid pole and their margins are parallel with the most outer poles in both sides. 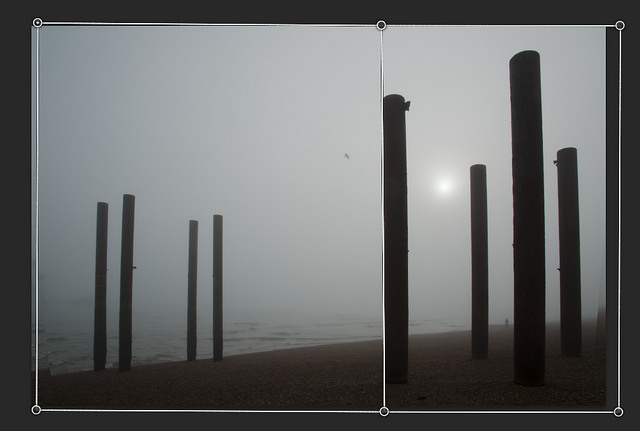 Clicking on the “Automatically straightening near vertical lines”, the straightening looks quite ok. There is obvious some pixels messed up in both left and right side of the image, but thats normal for such a tool 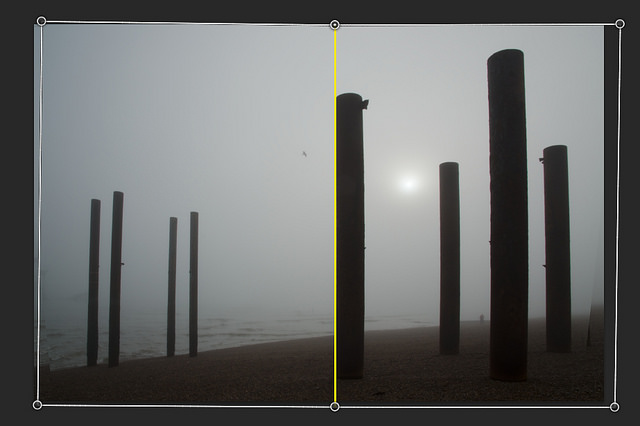 I shift-clicked the middle line between the 2 quads and then I could change the perspective, by showing more of the front poles, making them more prominent. The good part is that the line stay straight, and you can just move it by dragging any of its ends. 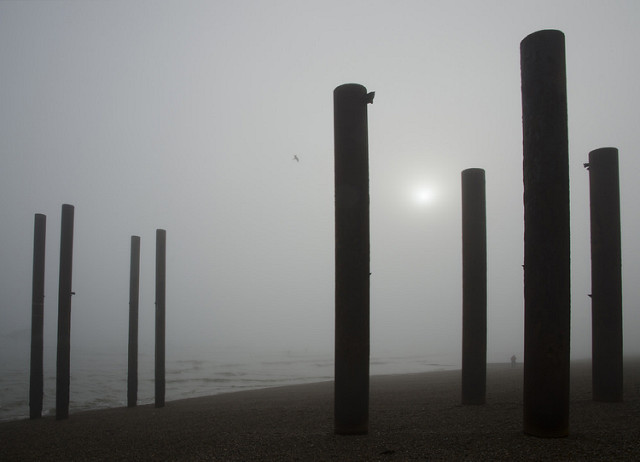 This is the final result after cropping out the mangled pixels. Obviously it is not perfect. Some barrel distortion is still there (from the starting image), requiring some extra work in Lens Correction. But this is just a 1 minute test of the tool, so obviously does not show the full potential of it.
This is definitely a tool with a some learning curve and the practice can only improve the results and the knowledge about when and how to use it to get it right. Until then, “Thank you” Adobe for a new addition to our toolset.
"Perspective Warp" Adobe Photoshop CC Brighton distortion Julieanne Kost perspective correction photography software Photoshop pier Review straighten tool Utils