January 01, 2014
As the end of year is fast approaching, it is the time to nostalgically review the best images from 2013. It has been a very good year, with a lot of photography, with many images awarded at different competitions.But 2014 will come with more dreams, higher ambitions and more passion. In this post I will show a selection of the best images posted in 2013, one each month. They will be presented for the month they were posted (and post-processed), not when they were actually shot, as some of the months in 2013 were pretty poor in terms of shooting due to unsatisfactory weather and lack of time.

One of the most known images from  Ioneanu Photography’s portfolio was actually shot here in Copenhagen. It was around New Year, almost an year ago and I was willing to shot Bella Center, a building that I like a lot and at that time, I was planning to feature it in a series. We went off the metro and suddenly the rain started so we decided to walk till Fields and wait for the rain to stop. I was very frustrated, a bit angry. 10 minutes later we were just in front of Wingmen building and the rain stopped. Carmen was pointed to the interesting facade and told me: “Look, this facade looks cool, might worth a long exposure attempt”. The light and the fast marching clouds were on our side and “Eyes to see the world” turned out to be one of the best in our portfolio with awards at International Feature Photographer Competition, ViewPoint Gallery, Halifax NS, Canada, International Photography awards  and PX3- Prix de la Photographie, Paris.  It also shows the importance of luck, of opening your eyes and checking for subject everywhere and of communication and listening opinions. 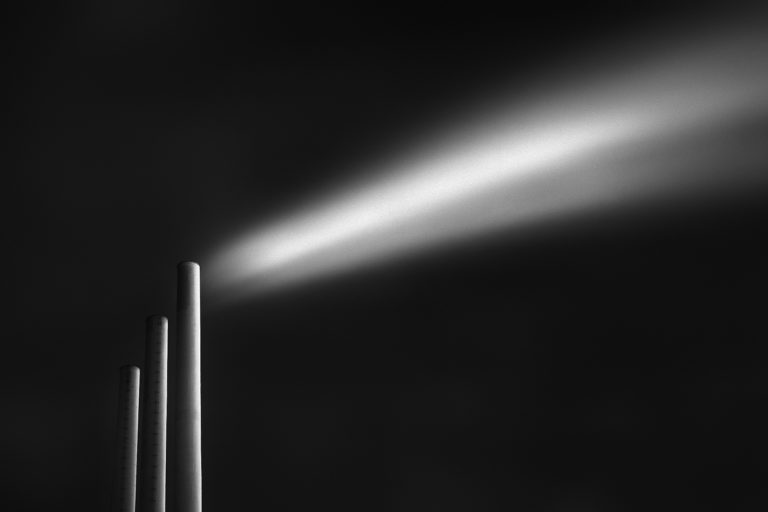 Last winter we were chasing chimneys. I remember our freezing hands changing the filters or raising the tripod. I also remember the curious looks on people faces, not really understanding what is so interesting up there to worth spending so much time shooting it. “Shape of Smoke” was taken very close to where we live, at Svanemollen Power Station; many attempts of getting the proper sky and the right wind direction. One guy, leaving the power station was almost sure we were shooting birds. I explained him that we attempt a long exposure of the smoke coming out of the chimney. He probably didn’t really got it, smiled back at me and wished us a good day. This image was very successful at International Photography awards, where it got the third place. 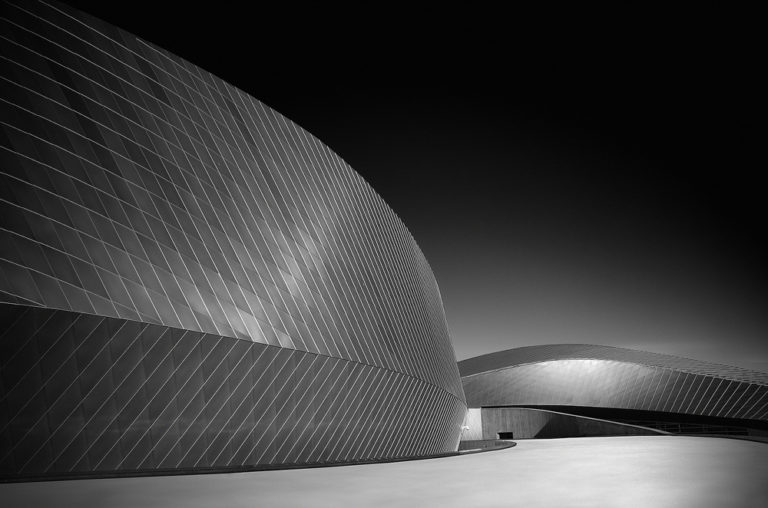 March started with “There is life on Moon”, shot on March,1 , posted 2 weeks later. It was just before the new Aquarium building in Copenhagen was inaugurated, in a sunny afternoon, with blue cold sky. I was after work and those afternoons, the sun was properly placed for shooting this building. Since not open yet, the water of the pool surrounding the building was rather clean. The right set of conditions for capturing this image. We came back couple of times later but we were not as successful: we were either sent home by an over- zealous agent or we were left disappointed by the level and cleanliness of the water in the pool. In April the aquarium was inaugurated, we visited it as well and we can say it is great. This image was awarded with a juror award of merit at International Fine Art Photography Award – Grand Prix de la Decouverte 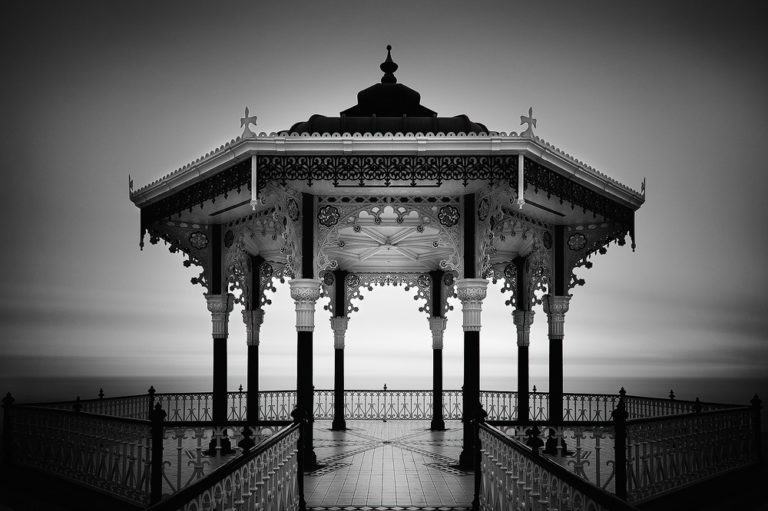 April was the month of a beautiful holiday in UK. We spent most of the time in London but we were also shooting on the coastline, experience that we enjoyed that much that we plan to come back there soon. The old band stand at Brighton is a lovely piece of history, with so much charm and character. We were lucky enough to get it without people (difficult for them to get there as we were blocking the entrance with our tripod, strategically placed) and right in between two rainfalls after a lovely lunch at a Scottish restaurant. The Victorian band stand is an amazing memory from the beautiful Brighton that hosted us with the best moody and capricious british weather that you can imagine: fog, sun, rain, clouds and deep fog again. “Victorian splendour” got a mention at International Photography awards. 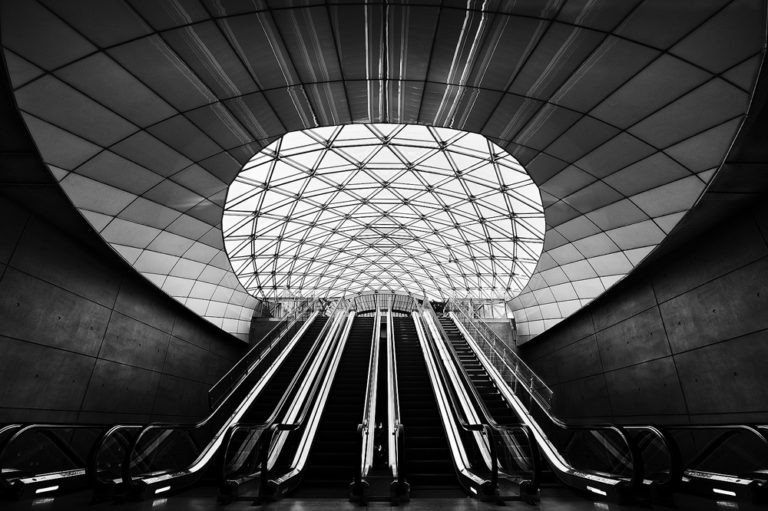 “Into the lair”, the image of Triangeln Station was shot on The Easter day, in Malmo . We selected this day because we expected few people moving back and fourth the stairs. And we were right. Carmen spent quite a lot of time processing it, I quite admire her patience when I lost mine just watching her cloning, dodging and burning, but it turned out one to be one hack of a post-processing work almost 2 months later. I love this SF look of the image and it reminds me somehow of the Star Craft game that we used to play many many years ago. 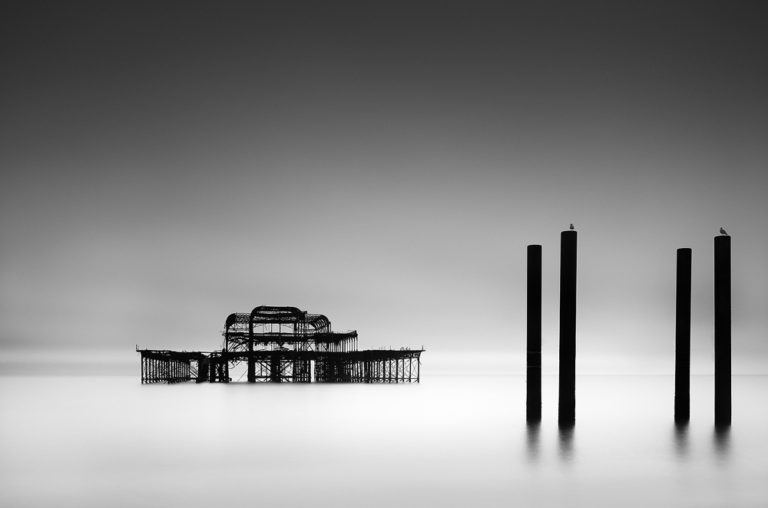 Brighton was so much in our hearts that you can see another image from there in this selection. 4 poles, 2 birds and the old pier that burned in 2003. A bit ironically to be consumed by fire in the middle of the sea. The pier will soon be restored and it will host a visitors observation tower. Soon, such an image will not be captured anymore and they will be part of the history of the place. For now, “Remnants from the past” is just a part of this 2013 collection of images done by us.
2013 2013 review april best february General images Ioneanu january july june march nostalgia photography Review top Visual Stories