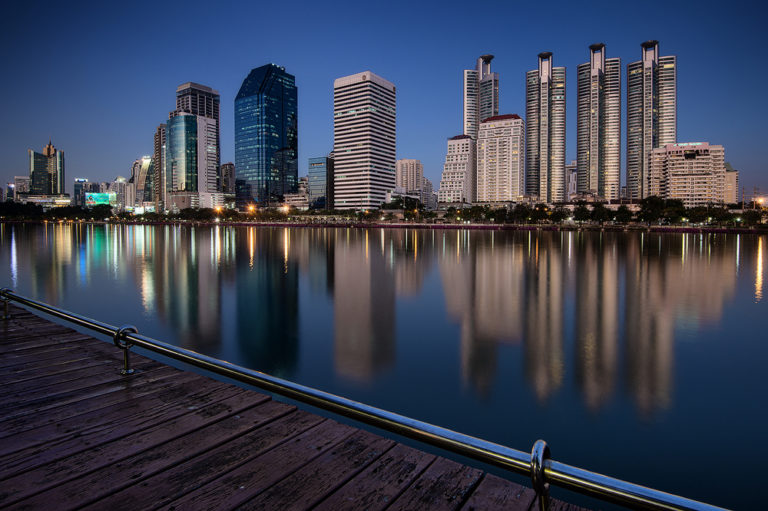 We arrived in Bangkok at 5:30 in the morning after a long flight. It was pitch black outside and the hot air hit us when we got off the airplane. In the airport, there was no obvious sign about where we could get our “on arrival” visas so we had to ask. The visa area was a typical kingdom of boredom. Few clerks were waiting for the odd ones coming from countries that have no visa exemption and given the early time of our arrival, they were probably at the end of their night shift so they didn’t look like enjoying their job that much . One guy processed our papers and we waited few minutes to get a stamp on the passport. Another guy was literally sleeping in front of his computer while the others were probably counting minutes to go home.

After we passed the immigration we were faced with the first dilemma: regular taxi vs limo. We checked the price for limo, we figured out it is quite expensive and the guy was not able to tell us an approximate price for the taxi. So we took our chances and decided for a taxi. And it was at least three times cheaper. 425 vs 1400 thb. Including the extra 50 thb that the driver asked on top of the meter price and the toll fees charged on the way.
Our hotel looks very nice and we were extremely lucky to get our room before 08:00 without having to pay for an early check in;  we had to change it first as we got a smelly smoking room initially. We decided to go for a quick nap but we couldn’t fall asleep as the hotel was starting to wake up: people taking showers, cleaning ladies, elevators moving up and down:  so we decided skip the nap to do some sightseeing. And damn…it was so hot.

In the first 2 hours, 2 guys tried to scam us:  people that looked very friendly, speaking surprisingly ok English, having an unexpected connection with Denmark (relatives, past traveling in Copenhagen) explained to us that our destination is not a good idea due to being crowded/closed at the moment and offering us an alternative destination in the nearby area, very accessible by tuk-tuk; a driver is summoned next to us in only few seconds, like a magic trick. After we refused politely, the guy was abruptly loosing the good samaritan behavior, moving away from us in just few seconds, not willing to waste his precious time and starting to hunt for new pray.

We visited the Wat Pho with its amazing collection of Buddha statues including a huge reclining golden one. An impressive symbol for Thai culture. In all the Thai temples you have to take off your shoes and emerge yourself in the sea of believers that make donations or burn perfumed sticks. Although the religions are so different, their ways of squeezing money out of people are so similar. Tired after walking in sunny hot weather and still sleepy after missing the night, we returned at the hotel for a short rest.
In the evening we visited the Marble temple ( with an Impossibly long Thai name: Wat Benchamabophit Dusitvanaram) which was supposed to be our location for blue hour shooting. But our plan, doubled checked with a local photographer suffered a hit, after the gate through which we wanted to shoot the temple was closed prematurely by the monks, so we had to move to the front side of the temple. The rain also poured for a few minutes, making the shooting more challenging. But not as challenging as finding our way to the hotel. The taxi drivers were either not stopping or refusing to take us to our hotel because of a reason probably well explained in the local language. So we had to walk almost an hour to the pier, using my phone as gps and take a fast boat on the river.

Back in the hotel, we ended up in the roof top bar, drinking an overly expensive beer: Hoegaarden almost 11 euros for a 0.33, as the listed price was not including 10% service and 7% vat. It was not enough, but coupled with the tiredness and jet lacked knocked us down to a good long sleep.
Day two of our Thai holiday was a day trip to Ayutthaya, the former capital of the Kingdom. We decided to use the services of a tour company called BKK Tours, a company with very good rating on tripadvisor. Our guide was Michai, a very nice guy speaking very good English that was ready to answer all our questions about Thai culture and customs. Since I personally have a very little attention span when a guide is telling his story full of historical facts, years and names, i prefer this approach where we ask stuff whenever we are interested. Another reason for a private tour was that it could be customized for our photographic needs.

It is amazing how such small area had such an abundance of temples and temple ruins. Ayutthaya was very rich, the central point of a powerful kingdom, so the walls of the temples were golden.  But now all of those have been burned, looted and vandalized while most of the Buddha statues are either beheaded or recently restored. Its a pity that so much history and culture has been lost and destroyed and the friends from Burma were equally guilty as local people willing to make a quick earning by selling relics on the black market.

The first temple we visited was an odd one: a mixture of catholic church and Buddhist temple. Stained glass windows, rosary and other elements of the church, but with a Buddha representation taking the place of Jesus Christ. The place was also a large monks school so we got the chance to see the young monks in their daily activities. The second temple, with Chinese influences, was impressive due to huge golden statue of Buddha. Lots of people were attending to a ceremony, donating money and getting some orange material in exchange, material to be used for dressing the statue. At some point, the guys climbed on the huge statue passed down some long orange material pieces, so that people got covered with it.

Here we also understood the difference between the Buddha representations in China and Thailand: the fat big bellied Buddha in China vs the more athletic one, that used to be a charmer according to the Thai legends.

We visited the local market, an authentic experienced as it is not a typically touristic place. Its amazing how many stuff we had no clue what they are: plenty of fruits that we never seen before, lots of tasty snacks or artisanal objects. You get the feeling that people living in different part of the world are so different and it is always so much to find out about their culture and customs, that it seems overwhelming at times. We had the lunch in a small restaurant by the river, trying some Thai dishes that Michai recommended for us.

Second part of the day we continue our trip through Thai history from the time when Ayutthaya was a prosperous city. The famous Buddha head in the tree, the huge reclining Buddha statue, the ruins of the royal palace and many other temples in more or less state of decay. Traditional Thai architecture sometimes blended with Khmer architecture like in the case of Wat Chai Wattanaram, the place where we shoot at sunset and after, during the blue hour.

Later in the evening we returned to the hotel, being lucky to avoid traffic jams. It was a great day and it did fully worth to have a private guide to show us the places and offer us so many insides in the local culture, instead of either joining a large tourist bus or going there by ourselves. We continued the “beer habit” for encouraging the sleep at a time that in Denmark was just the afternoon.
Bangkok culture temples Thailand Travel experience travel photography