Somerset: The land of summer people welcomed us with rain 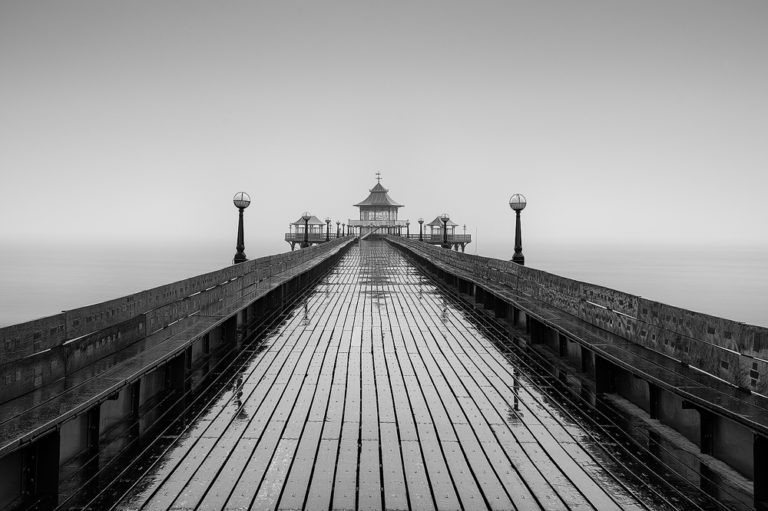 We arrived in Somerset Thursday noon, after a long trip: from Copenhagen to Weston-super-mare through Heathrow airport, Paddington (from where Carmen enriched her toys collection with a Paddington bear) and Bristol. Somerset was described by the ancient Welsh Celts and the Saxons as the Land of the Summer People.

Weston, one of the main touristic attractions in the county, is a picturesque seaside resort, with a wide beach (extremely wide when the tide is low). And the tide was very low when we arrived, with the new pier laying on the sand. You could say that it was sunbathing, but…there was no sun. Some hundreds meters away, three boats were aground in the muddy sands.

Our hotel is an old  and extremely small building, with just few rooms, located perfectly at the seafront; and nobody at the reception for many minutes, even if we rang. We waited and waited until somebody came to tell us to return after 14:00 for the checkin and let us store the luggage behind the bar. So off we went for a short walk on the marine parade. The pier, a marine lake and a ferris wheel are the attractions of the seafront.

We finally got our room and it is quite ok. Room number 1 with a great view of the pier (yay, no more back yard view). It is warm and rather clean inside. One little thing that puzzled us was a pair of taps, cold and hot water, delivering independently extremely hot or freezing cold water, but nothing in between. Tough choice for the morning teeth brushing. Well, not everything is perfect. We wondered couple of hours on the seafront, between the marine lake and the old pier (Birnbeck Pier). Birnbeck Pier is unfortunately closed for some time and in pretty bad state, a danger for any illegal visitor.

The marine lake is a small lake, separated from the sea by a thin concrete bridge which get totally covered by water at high  tide. Back to the main pier, hoping to get some nice sunset as the sun is perfectly positioned on the sea. No luck though this very first evening (and the ones to come), as the sun was covered in clouds and haze well before touching the horizon. But we got some nice view of the pier with the light gently reflected in the freshly washed sand. And a not so stylish dinner compensated by a pint of cold Guinness. Everything is good when the beer is good.

Next morning we are both up at 5:30. The sea is foggy and we wanted to get a morning view of it. But getting out of hotel we got an unpleasant surprise: it was raining. Somerset, the land of summer people was welcoming us with rain. Shame on you Somerset. It was too much to get out in rain with empty stomachs. After a rich breakfast with bacon, eggs and mushrooms we followed our plan to go to Clevedon. Carmen is still disappointed by her coffee with the consistence of a tea.

We had some troubles finding the bus station and other trouble deciding where to get off in Clevedon (trouble causing us 2 km of useless walking). Getting by the pier, the rain started again. Now its heavy and we are more frustrated. A nice coffee place called “Five The Beach” is the salvation, and we treated ourselves with two slices of delicious cake.

The rain is intermittently starting and stopping and we captured the character of the old Clevedon pier with an umbrella covering the camera.  The pier in Clevedon has been built in  the 1860s as both touristic destination and ferry service to South Wales. It was named a Grade I Listed building in 2001, list that designate structure of special architectural or historical interest. The legs of the pier are made of Barlow rails and they should be strong enough to support the streams caused by the very high tidal difference of about 15m (second in the world)

The souvenir shop next to the pier is selling Chocolate covered Seagull poo and we had to buy a pack of those (there are just raisins in milk chocolate). Soaked wet we head to Portishead which was not as photogenic as expected. After about 3 km of walking to a small lighthouse, the low tide was ruining the scene. Back to Clevedon for the high tide (and maybe sunset?) and a good shot of the pier while some locals where taking a bath in the cold sea with two guys filming and taking them an interview.

Frightening black clouds were announcing an imminent rain so we quickly packed our stuff and had a quick tea before the bus. No luck with the sunset tonight as well. Back in Weston, the rain is gone and black clouds are marching fact on the sky. The timing is great: blue hour. Few more shots before its getting totally dark.

It has been a tough day, so we treat ourselves with some expensive dinner at “The Old Thatched Cottage”, one of the best restaurants in the area and by far the best food we had in this holiday.  The people looked a bit strange when we entered the restaurant with our shooting gear and muddy shoes while all the other were nicely dressed for a cozy Friday dinner. Great tasty dishes and some nice sweet wine. Awesome way to finish a busy day.