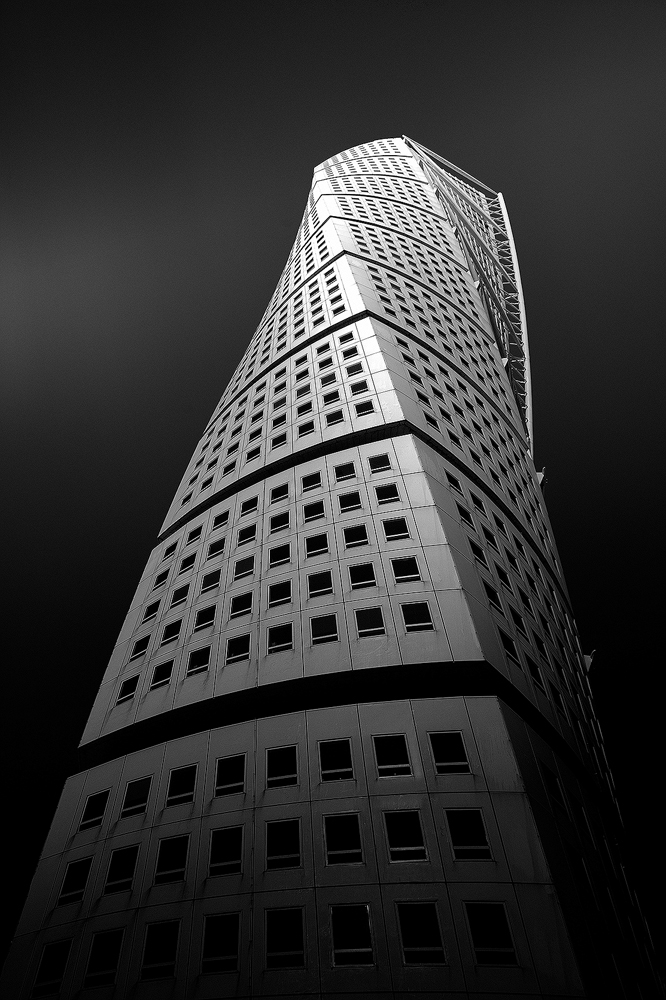 This is the tutorial that I wrote for 1X some time ago.

The plan was to photograph a famous building while paying homage to the well-known architect who designed it. Everything was perfect, except for the stark, uninteresting sky. Don’t let a barren, blue sky ruin your otherwise flawless image. Here’s what to do, before and after you take the photo.
Turning Torso, the tallest building in Scandinavia, is a famous architectural landmark in Malmö, Sweden. Renowned architect, structural engineer and sculptor Santiago Calatrava designed it, and it was inspired by his own marble sculpture of a human form called “Twisting Torso”. The spiraling, residential skyscraper is fully powered by locally produced renewable energy, and it twists a complete 90 degrees clockwise from top to bottom.

I live in Copenhagen, Denmark, and because Malmö is just on the other side of Øresund Bridge, I was inclined to include Turning Torso in my long-term photo project “Geometry in Motion.” I am a big admirer of Santiago Calatrava’s architecture, so I very much wanted to make a standout image that served as a photographic homage to his masterpiece.

When I photograph a building, I am usually in constant motion, always in search for the best angles possible. I move around the structure so that I see everything, shooting from a distance, and then moving in closer for a very different perspective. My goal on this day was to capture the unusual spiral shape of the building and to create a dynamic composition. I wanted the image to have an almost three-dimensional appearance while portraying the building’s distinct prominence. I decided to highlight a dominant diagonal that stretched from the bottom-right corner to the top of the building. It would become the leading line that guides the viewer up and around the winding structure. I also wanted the sky to be as uncomplicated as possible: the negative space surrounding the building enhanced and complemented the unique shape and structure.

I usually shoot a long exposure to create a dramatic sky, but there were no clouds that day to produce the effect I wanted, so I decided to replace the sky with another photo in my archives. I needed a sky that was fairly dark to contrast with the white structure, and one that would provide some light areas around the top of the building since it was the main point of interest. I first process my images in Adobe Camera Raw and then export them to Photoshop CC. When I convert my photos to black and white, I use Nik Silver Efex Pro 2 plugin.
TIPS:
1x architecture black and white Calatrava editing long exposure Magic Tower Tutorial Malmo painting with light Photoshop CC post processing Sweden Turning Torso